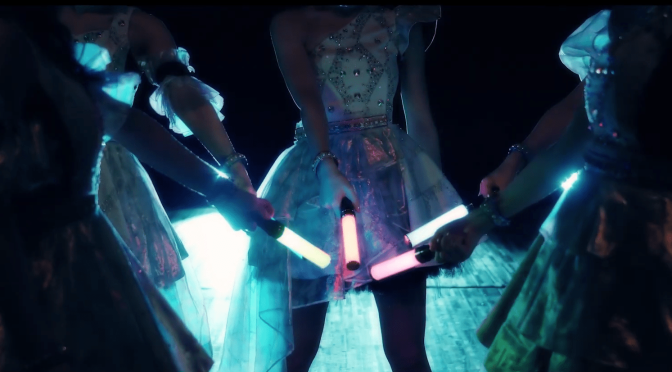 With a decade’s worth of support behind them, Houkago Princess celebrate their 10th anniversary with the release of Psyllium no Shoumei, a release dedicated to the passion and drive of the fans who have supported the Idol industry throughout the years. Whether it is the support of Houkago Princesses various era’s or the trial and error of the other groups that surround them, this is a single that aims to thank all fans far and wide for dedicating themselves to the brilliant and shining world of Idols.

Based around the theme ‘The Idol World’s Princesses’, Psyllium no Shoumei is the third original installment to the groups Princess themed releases, as well as the last to feature the entirety of the current main lineup, as all five Regular members a set to graduate in Spring of 2022.

Taking center stage is the title track itself, Psyllium no Shoumei, which features a melancholic verse seeped in gratitude, and an upbeat chorus that is perfect for the fans to wave their penlights to. The lyrics have a core focus on the driving force behind all idol groups – the fans – as well as small hints at the prospect of moving forward and straying away from the glittering world of penlights and support, no matter how uncertain the idol might be.

The song is catchy, memorable and enjoyable, but upon learning of the current lineups impending graduations, it has also become poignant in sound. The vocals are the most mature they have ever been from the group, each members voice is filled with resolve, and yet there is still a glimmer of sparkle embedded into the instrumental that has become a core part of Houkago Princesses ever-expanding sound.

The accompanying music video is just as enjoyable to watch as the song is to listen to, though it may seem like nothing special to begin with. Visually, Psyllium no Shoumei is nothing new in terms of execution or style, but for Houkago Princess this is a first, and the decision to film on a stage and use a majority of close-up and dance shots is a refreshing change of pace for the group.

With a lack of extravagance in the background and little to no alternative scenes, Psyllium no Shoumei feels far more mature than previous music videos the group has delivered throughout the years. It is this very simplicity that allows us to appreciate the group as they are now, from their efforts as performers to the solidarity of the group that is clearly presented throughout the choreography.

This is not our usual Houkago Princess affair of glittering costumes and wonderful scenery, or a story that is based on fairy tale and historical figures we have read about during our youth. Instead, this is a simple video that aims to appreciate the beauty of idols and the reason why we support them. Instead of pulling us into a world of Princesses, Houkago Princess bring us onto the stage of an idol and the world they have vowed to be a part of.

The music video for Psyllium no Shoumei is brilliant in its own way, no matter how simple it may seem. It shines and allows us to see Houkago Princess as any fans view their favourite groups: a group that stands on the centre of a stage and gives it their all, no matter who happens to be watching them.

It is wonderful, and while it may not seem impressive to most, Psyllium no Shoumei is a release that fans of Houkago Princess will hold dear. It shines in its own way, and it celebrates the support we hold for the groups that love.

Following the brilliant send-off that is the title track, Mukai Kaze o Tsukinukete delivers a vibrant contrast in sound, and is the first Houkago Princess song to feature Houpri Youth – the trainee and little sister unit to Houkago Princess – throughout its entirety.

Bright and upbeat, Mukai Kaze o Tsukinukete is a song that depicts the fearless hope of the members as they race towards their future. Be it the undetermined future after graduation or the uncertainty of a trainee leading the future of the group, this is a song that will restore hope in the fans who support the current formation of Houkago Princess.

Where Psyllium no Shoumei is brimming with celebration for the members and the fans, Mukai Kaze o Tsukinukete allows us to look towards the expansive future of the group. This is a song that not only celebrates moving forward regardless of the path we choose to take, but also anticipates a new beginning as Houkago Princess prepare to pass the baton towards a new generation of idols.

Initially promoted as a release that was created to celebrate the fans and the support they hold for any and all idols, Psyllium no Shoumei has since proven itself to be more than it had initially been presented as. With its subtle hints at moving forward embedded into the lyrics and the solidarity shown between the current lineup, Houkago Princesses most recent release is not only a thank you letter to the fans for their support over the past ten years, but also a farewell to the current and former idols that came before them as they make way for a new generation.

Debuting in 2011, Houkago Princess is an idol group that wears school uniform during day performances, and transform into their glittering Idol or Princess costumes and tiara’s after 4pm. Currently made up of Sekine Sasara, Michishige Saho, Kohinata Nanase, Sawada Momoka and Nishimiya Airi, the group performs regularly at various idol events and TIF, and usually hold day and evening performances. The little sister unit, Houpri Youth, is a trainee group that works under a promotion system in which the members aim towards becoming Regular members of the group. Currently, members Morikawa Yuu, Nakano Rion, Mizuno Aoi and Yoshioka Maki make up the Youth system.

Be sure to support Houkago Princess by listening to or purchasing the single here:

You can also find out more about Houkago Princess and support them via the following links:

The music and culture webzine